The Spontaneous – An Ordshaw Vignette 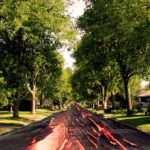 Here’s the latest in the Ordshaw Vignettes series (if you missed the last one, check out The Singer here), Today’s episode speaks of community, trees, the subconscious and peer pressure. And if all that sounds delightfully good-natured and important, rest-assured it’s not.

This is a pretty morbid tale.

Yes I still feel guilty about what happened to Sidney Taunton back in 1997; a deeply terrible thing. But can you blame us? Really?

11 a.m., thereabouts, on a Thursday morning, after a little shopping run, I spotted people gathered under the old ash tree. A grown man sat on a branch some fifteen feet up, clinging to the trunk for dear life – Sidney, a work-from-home computing type who took out bin bags in pyjamas. And there was Sally Rawn, retired Jim Bucket and a skinny postman all looking up.

Briskly joining the commotion, I asked, “He stuck? Can’t you get down, Sidney?”

“It’s not safe!” Sidney cried with fear. In my confusion, I suppose, I smiled. Sidney had on jogging pants and a bath-robe and his bin bag was discarded in his drive, dropped in a hurry.

I suggested: “Dog chase you up there?”

“He’s off his rocker,” Sally said. “Says the ground caught fire when he came outside. His screams near made me drop my tea.”

“Is he on medication?” the young postman suggested quietly.

“Needs a bump on the head,” Jim snorted.

“Heavens,” I said. This was Swansea Avenue, after all, not Bedlam; all they needed, I supposed, was someone to take charge. “Sidney now, you’re having an episode, but there’s really nothing to worry about. Come on down, we’ll talk it out.”

“Like that kiddy game?” I said. “Oh Sidney, we’re standing here right as rain, aren’t we?”

“You can’t see it! It won’t hurt you if you can’t see it. But I can! Something broke in me, or got fixed – I know it!” He blubbered for a good few minutes with frantic remarks about perception and reality while I tired to persuade him otherwise, drawing his attention to how splendid everything looked today. I wanted him to focus on what was plainly real and normal around us, even if he saw lava stretching further than the eye could see. I said, “Well now, Sidney, can you tell us how it is everything’s not burnt up?”

“I could knock him down with a good-sized rock,” Jim said.

“Oh rot, Jim, you’ll do nothing of the sort!” I said. “Sidney, tell me this. How’s a tree safe? A tree can’t be in denial, how’s your perception explain that? And my car? See its tyres flat on the tarmac?”

His face contorted with anxiety. The poor man wanted to believe me, no matter what horrors he thought he saw. With his wild eyes and all that sweat, honestly I considered the postie might be right – off his meds or on something new. Though it turned out he was tee-total, and really, no one’s explained this since.

“It’s not now, is it, Sidney? And we’re here to help, aren’t we. Why not take my hand, dip a toe in, yes? You can always shoot back up your tree again.” Sidney swallowed his fear. It was only logical that he come down. I rallied the others, “Come on now, tell him.”

“Absolutely, you can trust us,” Sally chimed in.

“But it looks so real . . .” Sidney gave one last, unconvincing complaint. Were it just the two of us, even three, he might have held out longer, I suppose, but with all that encouragement, we’d worn him down.

Slowly, he lowered himself, everyone breathing a little relief. Sidney shimmied down the trunk, not taking his eyes off the closest paving slabs.

“There it is, lad, right you are,” Jim said. Like we’d achieved a thing. And Sidney stretched out a leg, gritting his teeth, ready to shatter this strange illusion.

Only, when the toe of his shoe touched that paving slab, he lit up – from the point of contact it spread over him in an instant – he lost his grip and hit the ground and the flames were tremendous and the screaming horrendous and I swear we couldn’t any us have known it’d happen nor can say now how it did. I feel truly awful about it, I do.

Oh silly Sidney, should’ve stayed up in your tree! There’s a moral here, isn’t there? Maybe. Anyway, tune in next month for another vignette, and to be sure not to miss it, and if you haven’t already got Volume 1 of the Vignettes, join the mailing list here.