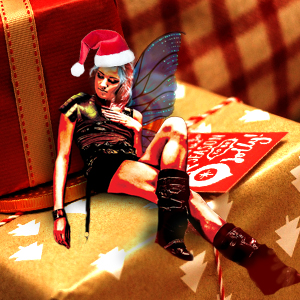 As we’re well into December, and I’m knee-deep in the festive spirit, it’s time for a tale of seasonal cheer.

Off the back of last month’s delightful Violent Fae tour I was left thinking we had some unfinished business. Specifically, what goes down in Ordshaw around Christmas?

So, today I’m sharing a free bonus vignette – The Merry. With all the holiday cheer you would expect from an Ordshaw story. It’s the first of an extended series I’m putting together to share free on the blog, expanding the vignettes beyond the Fae to explore the other nooks and crannies of the Ordshaw universe. I’ve got designs on ancient evils, haunted office equipment and such things to come.

Only, this story keeps us in familiar territory for now. To be continued with a second part next Christmas. But you’ll have to wait for that.

Now, on to the story! Get your Christmas on with The Merry…

Claudia didn’t notice the voices until the mulled wine was bubbling on the hob and she was hustling the Sarkov children’s stocking fillers out of the cupboard. Having left midnight mass early to arrange a magical welcome for her host family, Claudia was sure to earn Christmas Day off. But her body tensed before her mind caught up.

Someone else was in the house.

The voices were coming from the parlour, where the blue, red and green of the tree lights flickered through the gap in the double-doors. A man’s voice mumbled low.

“Didn’t I say, best dram you can find?” a woman answered in a crass tone. They were in there with a small fortune in presents under the tree – Alexei’s computer, Mrs Sarkov’s Louis Vuitton bag, a rare LB Aois whisky for Maximilian.

“Is fine, real fine,” the man slurred back.

Whoever it was, Mrs Sarkov wouldn’t tolerate Claudia standing idly by. She crept to the doors and peered slowly, slowly in. Lit only by the shifting kaleidoscope of the lights, the room was scattered with wrapping paper. Little Luba’s new iPad lay by a shredded box. On a round side table, flanked by armchairs, sat the bottle of LB Aois, wreathed by torn paper. Open.

But there was no one there.

“More?” The woman’s voice came from the bottle itself. “Cut us some pie.”

The paper jostled and something floated out of it. The rising shadow of a small bird. Claudia was suddenly in the room, staring with eyes big as baubles. The silhouette was no bird, but a tiny woman, settling on the bottle lip. And by the bottle, a tiny man crouched on the mince pie left for Santa. Lacy wings rose from both figures’ shoulders. The man had a hooded sweatshirt and a beard – the woman cargo shorts and a pony-tail – so real. She lowered something into the bottle. A fairy, fishing for whisky?

“Here, this –” Lifting a chunk of pastry, the man noticed Claudia. Catching his silence, the woman looked up. No one moved.

“Tell you what –” The tiny woman regained her composure, trying to stand straight but flapping an arm and a wing to keep from falling. “Tell you what, pretend like this never happened and you can join us for a glass. It’s bloody good wicky.”

Claudia could only stare.

“Why she back so soon?” the man said.

The woman took something from a pocket. “By the brows of a macaroni penguin, I did not appreciate the time. Told you opening presents was a waste of time, Terry.”

“A macaroni wha –?” Claudia heard herself say. They spoke so normally, these little things – having torn the presents asunder – for what? She took another step, pointing. “No – look here –”

The little woman flew backwards and the man, Terry, tripped over his own feet, hitting the whisky bottle. Startled and fleeing! Damned if she’d let them – leave her with the blame – Claudia spotted a discarded cardboard tube on the floor and snatched it up. She spun to the man, but he shot out of the way and she hit the table.

“The wicky!” the small woman shrieked. Claudia dived to catch the catapulted bottle, but her fingers brushed it further away, over the tiles. Glass and whisky exploded across the fireplace.

Claudia blinked in alcohol-streaked horror. The two tiny people hung in the air with equal dismay. Then the woman darted down to a shard of bottle and grappled with the last liquid, trying to save whatever was left. Instinctive fury made Claudia lunge at her. “Leave that alone!”

The woman jumped aside and Claudia’s hand closed on broken glass. She stood with a cry, blood flicking black over the wall – the stockings! Claudia leapt back and hit the armchair.

“Watch out!” the tiny woman warned, as Claudia met a wall of pine and tinsel and glittering baubles. She put a hand up to stop it, but with a creaking, jingling topple, the great tree pulled Claudia down with it, branches stabbing and glass shattering.

Groaning, Claudia disentangled herself from a chain of tinsel to sit on her haunches. The room rang with the tinkle of settling shards of decorations. The tiny woman perched on the nearest armchair and whistled. “You’re gonna have a hell of a time explaining this.”

Claudia could not reply, eyes shimmering on the brink of tears.

“Ah. Here.” The woman flew closer, holding up a miniature arm, something in hand. She nodded encouragingly, and, in despair at what else to do, Claudia lifted a finger and let the fairy place something there. A cup, not two millimetres wide.

“What you giving her that for?” Terry asked from up high.

“Have a heart you prick.” The woman flew up into the shadows, fast. “Merry Christmas!”

Then they were gone.

Claudia sniffed at the cup. The barest trace of absurdly expensive whisky left.

A shrill voice shouted from across the house, rising as it got closer: “Are you trying to burn the house down, Claudia? Leaving the wine on full –”

With a sharp gasp, Mrs Sarkov stopped in the doorway.

Claudia stayed silently kneeling within the carnage of the tree, one finger raised to delicately hold the cup. She might get tomorrow off, after all.

And if you enjoyed that particular brand of seasonal cheer, you might also check out my old dystopian novella, A Most Apocalyptic Christmas. (Not you average Christmas story.)