I’m thrilled to share a blog tour celebrating the release of The Violent Fae, with 12 Ordshaw short stories being shared free over 12 fantastic blogs. It’s a honour to be hosted on such great sites – check out the full schedule and information below: 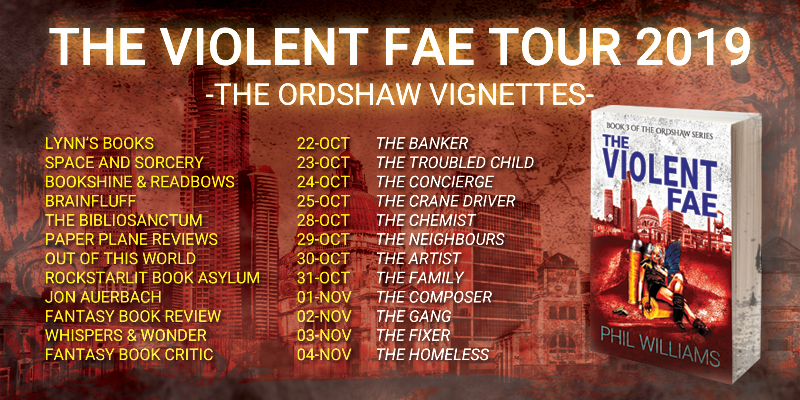 What are the Ordshaw Vignettes?

These 12 stories explore life in Ordshaw through mini, flash-fiction mysteries. We’ve go a spectrum from drug dealer clashes, alcohol abuse and armed robbery, through to artistic impotence, domestic arguments and bike races, to name just a few. There’s no end of craziness in Ordshaw waiting to be revealed – and these particular insights are united by one question: Do fairies exist?

This comes ahead of the release of The Violent Fae, Book 3 of the Ordshaw series, out November 5th. A book that finally exposes one of Ordshaw’s best-hidden indigenous populations. The Violent Fae draws a close to the opening trilogy of the series, started with Under Ordshaw and continued with Blue Angel.

These vignettes contain fully or7iginal characters and situations, but frequently intersects with the series at various stages. Read the whole collection for a taste of the city or to build a bigger picture for seasoned hands. And if you’re eager for more, I’ve got a short ‘cheat sheet’ of trivia on each story’s wider relevance included beneath the story links.

The Stories and Their Blogs

Besides reading the vignettes, be sure to check out all the sites that are kindly hosting them. They’ve all been very supportive and are wonderful people! The links below lead directly to the stories.

Space and Sorcery – The Troubled Child

The BiblioSanctum – The Chemist

Out of this World SFF Reviews – The Artist

I hope you’ll enjoy these stories as much as I enjoyed writing them. Be sure to check out the full Ordshaw series for more!

With so much going on in Ordshaw, it can sometimes seem hard to keep track. I’ve prepared the following notes to help fit some of these stories into the bigger picture.