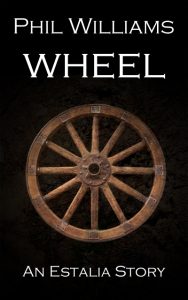 This is the first of my Estalia Stories series – short snapshots of life in Estalia, the world of Wixon’s Day and the upcoming Aftan Whispers. “Wheel” is available to read below now, for free – it’s an ideal coffee-break filler. An eBook version is available to download here.

Another nail split as Rugher’s fingers scraped against the sunken object. Moving too fast. They were all speeding up now, though, as daylight faded. Clawing desperately at the dirt. All except Norris, who stood with his arms folded.

Rugher stepped aside, shaking her hand. The nail had fractured like a broken tile. There was nothing to do, no time with the Flesh Hunters coming. Their tractor engine would be repaired by now. They could arrive at any moment.
She moved her fingers to work out the pain.

Norris’ eyes said that she deserved this suffering. He’d made his position clear enough already. It was a fool’s task, and they would get themselves killed. The steam-carriage was broken beyond repair; they should have set out on foot hours ago. This half-buried object could be anything, barely showing through the dirt. They might dig until dark and still not get it free. They might get it free yet and find it useless.

They had dug until dark. A vaguely purple hue had overtaken the world. But Norris’s complaints had stalled, as even he had to admit that the dig might succeed. They’d revealed exactly what Rugher had hoped for. The circle of metal, a metre across, matched the size of the wheel that had shattered against the rock. The hole in the middle was the right size for their axle.

It wouldn’t be long now; the moment It was clear they’d be moving, away from the hunters. It couldn’t be long. Escape in the steam-carriage was their only hope; there was no other way to outrun the Flesh Hunters. That’s why Norris stayed despite his comments.

Rugher didn’t rise to it. If he put half his complaining energy into digging, they would have uncovered the object already. Using her anger, Rugher dropped back to her knees and drove her fingers into the soil, ignoring the ripping nail. She tore a wad of dirt out. Watching her, Hergol, the driver, doubled his efforts.
Four people, eight hands, attacking the soil, tossing clumps clear, panting. They were close. They’d break the wheel free. They’d make it to the outpost. Tell the guards what they’d seen, who these hunters were. Be safe at last.

“Not an hour of light left,” Norris reminded them.

“Shut up and help,” Rugher huffed.

“Where’s your Providence now? The light’s fading, don’t you see?”

Hergol grunted to tell Norris to be quiet, but said nothing. Norris glowered back. The driver didn’t want a fight. Norris had used every insult under the clouds without reprise. He had called the carriage was damaged beyond repair, and blamed their idiot driver. He had said they had no time to run, let alone to affix another wheel. He’d complained that Rugher’s discovery in the ground was the wrong shape, and that it was impossible to dig up. He’d said it would crumble when they tried to move it.

The others didn’t argue; Norris stood bigger and wider than any of them. His complaints had been answered by actions, though. The malcontent had no suggestions of his own, so the group dug. They dug with the whatever was in their bags, and when those tools bent and blunted they used their hands. They picked the world apart around this relic, this throwback to a forgotten time. As it started to reveal itself, Rugher ignored Norris’s concerns and ignored the fear of the hunters. Almost there. The thing was all but free.

What had it been? How did it get there?

Estalia was awash with such things. Artifacts of whatever came before. Metalwork and machinery that gave scavengers lives. Ancient secrets that fuelled the Mines. The relics of the time before changed lives, if you could only figure out how to use them. That’s what made the Guard strong: they were better people who had embraced these lessons of the earth. In her small way, Rugher was doing it now, at least. This secret from the long past would fix their steam-carriage and secure their new life in the Metropolis, where savagery was dead.

“This’ll do.” Hergol tugged on the object’s edge and it finally pivoted.

Everyone stopped, barely able to believe it. It was loose, at last. Hergol tugged again, more dirt breaking around it. The driver raced to the carriage. Norris came closer, his deep frown an admission that he’d been wrong.

“Out the way,” Hergol shoved him, hard, and Norris stumbled. The driver squeezed a chain between the object and the soil, threading it through. The others helped, scraping dirt from between the spokes. Hergol took the end and hurried back to the steam-engine. “Keep feeding it through!”

They did, feeding link after link, until half the chain had been looped through the object. Hergol linked it to the engine and stoked the furnace. As the engine’s cogs turned, Rugher said, “Everyone grab hold!”

“You’ll break the engine,” Norris said. “You’ve no idea how heavy this thing is.”

It was never a question with him, always a fact. Even with his facts proved wrong again and again. Rugher pushed him, too, now, jamming a shoulder into him as she took her position on the chain. The others got a hold as he took a step back. Norris eclipsed her, standing rigid like he wanted to push back. But he was wrong. They were going to get out of this alive, with him, and there was nothing he could do about it. Rugher said, “Just pull your damned weight.”

The malice stayed in his eyes, but Norris held the chain with the rest of them. It tightened in their grips as the engine rotated a cog that pulled it back.

They heaved as one. The wheel creaked against the ground, all their strength behind it.

The travellers scattered as the earth broke apart, and their find lurched forward with a heavy sway. It rose to its full height and teetered, then tipped, its weight wedging it back in the earth. They gathered around it, a conspirators’ circle afraid to acknowledge the truth of their achievement.
Rugher turned away as Norris pushed past for a better look.

He erupted in a laugh from the very bottom of his belly. He boomed, “You fools! You damned fools! What did I say? The day’s wasted – you are wasted! You believed – you dared believe in the Providence of this? This garbage?”

It was no wheel, nor anything they could use as a wheel. Circular, perhaps, but warped at the edges and hindered by the limb of a shard of metal that jutted from the rim. A handle, perhaps, or a pipe – welded to the outer edge. There was no way this object could rotate without catching on the earth below or tearing through the carriage above. It might have been an industrial bin lid, or a furnace top, or some chunk of once practical engineering – whatever it was, it was utterly useless now.

Norris knew exactly what to say, though. “You should have listened to me.”

“With what?” Norris laughed again. “Your teeth?”

“We should run,” one of the others said, barely above a whisper.

There would’ve been, though. If he’d helped. There might’ve been time, even, to file the object into something usable, if he’d only helped them dig.

The clouds above were darkening, and if the hunters didn’t catch them soon, the chill of night would. Rugher looked at the splintered remains of her dirt-encrusted finger nails. As Norris cackled, she flexed her fingers and formed fists, considering the things she could do to him. Punch him. Throttle him. Dig out his eyes.

Norris moved away, rounding the carriage with derisive chuckles. He said, “Should’ve gone by water, shouldn’t we? Who takes the roads? Who with any sense?”

Rugher took a murderous step towards him. His expression shifted, though, eyes directed back up the road. His smile was gone, and though his mouth was open he had nothing more to say. His unblinking eyes watched the horizon. Rugher came around the carriage to see what he could see. Silhouetted against the dimming sky, a trailer filled the distant road, edged by spiked weapons and tensely wound men, ready to pounce. At is front, the tractor engine they’d sabotaged was putting smoke, dragging the Flesh Hunters towards them.

“You assholes,” Norris uttered, as the travellers lined up to watch. “Why didn’t you dig faster?”

Rugher felt the warmth of the steam-carriage furnace next to her and spotted the stoking iron. Perhaps the only tool they had left, between them, to put up any kind of fight. There was still a chance. They had lost a lot of time, but there was a way to gain some back again. If the stories were true, the hunters might be satisfied with one of their number, and not pursue the rest. At least not straight away. Not if they offered them the biggest member of their group.

“You happy, Rugher?” Norris growled. “You did this to us.”

His eyes were still on the horizon when she swung the iron at his head.