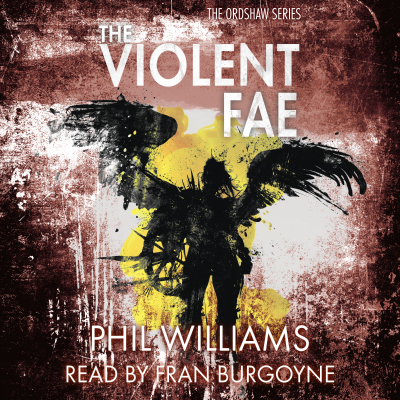 Spring is in the air, the trees are in bloom and woodland creatures are scrambling out of holes to squawk noisily into the morning sunshine. With this gentle onslaught of life renewed, new life is also being breathed into the Ordshaw series as the eagerly-anticipated and marvellously performed The Violent Fae is on the cusp of an audio release!

As it’s the final story in The Sunken City Trilogy, we’ll soon have the full gamut of books performed for yours ears’ trembling pleasure – with over 30 hours of superb voicework from award-winning actress Fran Burgoyne.

What to Expect from The Violent Fae Audiobook?

If you’re not already familiar with the Ordshaw audiobooks, Fran has been doing an incredible job of bringing them to life. She is a one-woman show, and adds a whole new dimension to the stories that really transports you there.

The Under Ordshaw audiobook got a great review on Esme’s Weatherwax Report, where she said “I love when dialogue is done so well”, and Bibliosanctum described it as a “very entertaining listen”, saying it was “fantastically performed by Fran Burgoyne, who made getting into this story so easy with her smooth narration and expressive voices”.

Expect more of the same from the third instalment, as it brings the trilogy to a frenetic close rife with conspiracy, murder, creepy monsters and a lot of mixed up individuals. Fran’s been graciously sharing previews of her in the booth performing samples of the upcoming book – giving the appearance of her being quite possessed by Ordshaw characters. Check them out here, here and here.

The Violent Fae has been fully recorded and we’re working our way through proofing and final edits, so it should be ready in a month or so. Given Audible’s tardy uploading times, we’re aiming for a June release, but watch this space!