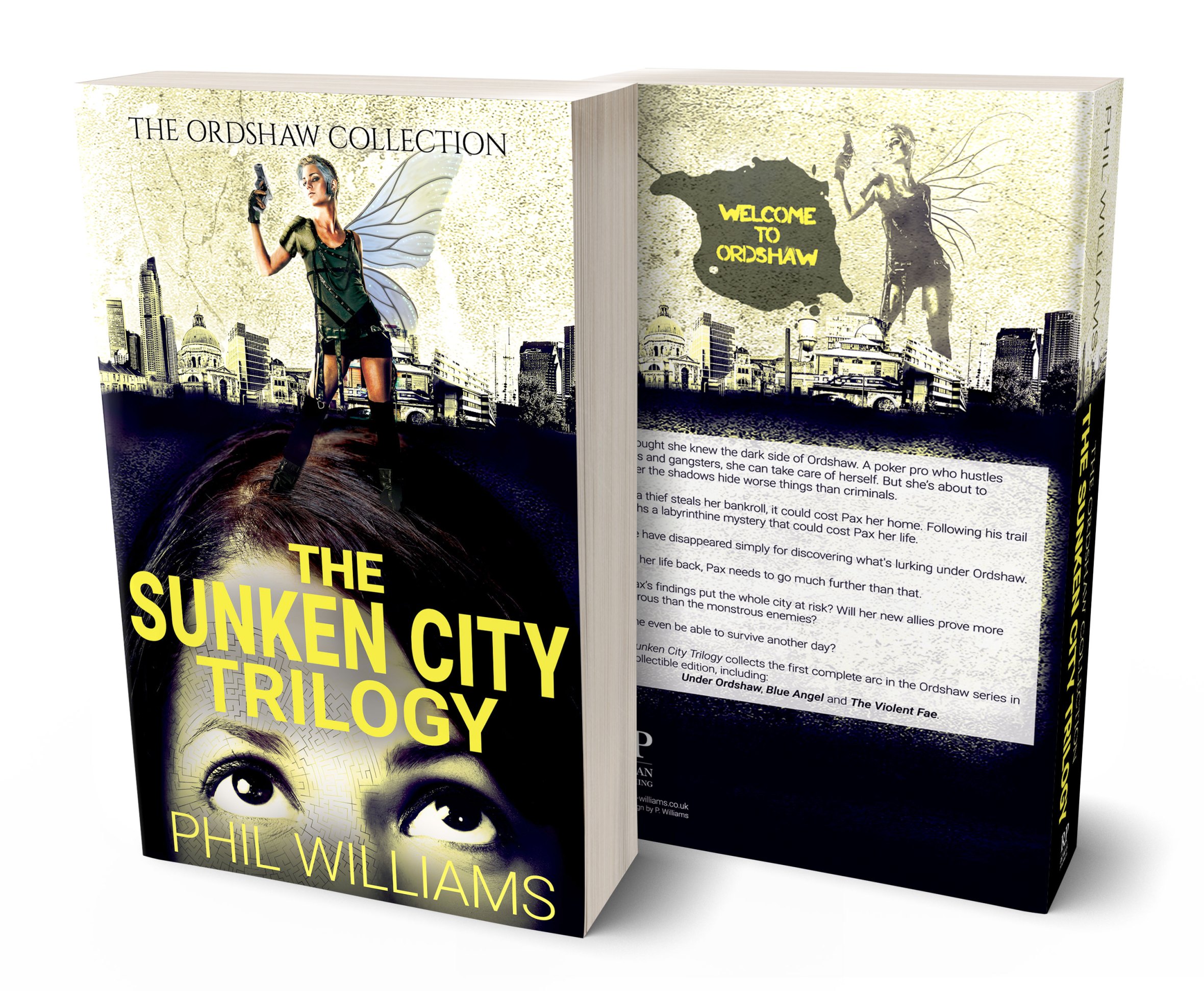 Well, I’ve reached what’s been my end goal for the better part of the past two years. The Sunken City Trilogy is complete – a three-book arc that started with Under Ordshaw,  finished at last. Not only finished but now available in a collected eBook and paperback omnibus.

The cover was revealed last week on the wonderful Whispers & Wonder (check it out for some delightful graphics, including the one used here).

Check it out RIGHT NOW.

Releasing The Violent Fae and putting together this collection crucially rounds off a story that was otherwise only partway there. The trilogy takes place over an exhausting eight days – the characters go through a lot in a short time, and there are twists upon mysteries to deal with, all demanding closure. Now, they can rest.

Though, admittedly, I’m not about to stop any time soon …

There are mysteries yet unsolved and a lot of new characters waiting in the wings to experience new plights.

The Ordshaw Vignettes, now available in eBook form, gives some idea of the scope of my thinking – but Vol. 1 is narrowly focused on Fae goings on. The next set of vignettes I will release monthly, through this blog, exploring the wider world that Ordshaw belongs to (though the Fae make another appearance in the first outing … a Christmas feature). That set will overlap with another volume of vignettes I’ve got planned for the release of Book 6.

To keep track: right now, with The Sunken City Trilogy and The City Screams, we’re up to 4.

I’m simultaneously writing Books 5 and 6, as they veer off on two different tangents. Book 5 picks up where The City Screams leaves off, while Book 6 introduces an all new story featuring a character I’ve lived with for a very long time. She’s awful. With these two arcs we’ll eventually have another two complete trilogies, but there’s also at least two standalone novels that might sneak in in between.

Provisionally standalone, that is. It’s all connected.

Upcoming, we’ve got dangerous art, assassins fighting ghosts, bank robbers and swamp monsters, the legacy of the Antler King and an evil tower block. To say nothing of the eventual return of the Fae and the potential for a couple of historical novels in the mix.

By the end of 2020, I hope to have broken the back of a fair chunk of these developments, and made serious headway towards the next compendium. But my speed will depend on really pushing the series now – with the first proper story complete, my head will be somewhat in marketing it. So please do help me along and keep leaving reviews for any of the Ordshaw books you’ve read!

Frankly, though, however well the sales shape up, I’m building myself a labyrinth of novels to compete with the Sunken City itself. There’s trivia from Under Ordshaw that might not come full circle for a long time. And I’ll stick at it, because I must.

In the meantime, I hope you’ll enjoy The Sunken City Trilogy in its new, hefty tome. I personally think it’s a cracking read, and couldn’t be prouder to have got here.