Book Review: Symphony of the Wind by Steven McKinnon 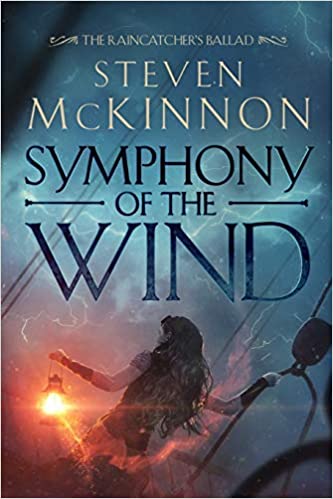 Symphony of the Wind by Steven McKinnon is available here.

I meant to post (and also write) this yesterday to fit in with Self-Published Fantasy Month’s Daily Challenge, that ship has sailed, but life got in the way and haha, now that ship has sailed (I’ll let myself out). But listen, this book does contain airships, so that should make you want to read on.

I’ve been interested in Symphony of the Wind since seeing that stunning cover back in my first SPFBO. But I foolishly bought the paperback and the other thing to know about this book is that it’s big, and as I spend much of my reading time lying down I feared I might drop the book and crush my skull. Then I bought the eBook and the problem there is that I tend to forget to read things on my Kindle – I’ve actually tried to buy the sequel, Wrath of Storms, three times, because I forgot I’d already bought it. Fortunately, Steven gifted me a code for the audio and I finally got around to reading (listening to) it.

From the start, I could see it was all I’d hoped it would be looking at that cover. It’s a solid, rollicking steampunk adventure with plenty of twists and turns, lots of action and a pretty relentless pace, which is remarkable considering the length of it. There are bounty hunters, gangsters, raincatchers and a grandly weaving plot of monsters and corrupt warmongers that brought to mind the sort of sprawling sagas you get in Final Fantasy games. The aesthetic, too, reminded me very fondly of that, though the airship pirates and whatnot got a little left behind after the early stages, as the action shifted away from the skies (boo!).

This is a truly ambitious book that pulls off what it sets out to do with admirable dedication and skill from the author. My only real sticking point, though, was that maybe it should’ve set out to do less. I couldn’t really pinpoint anything or anywhere I’d trim back, exactly, but I did wonder if it couldn’t have been shorter, as with such a vast spread some of the impact faded.

But maybe that’s just me – I get restless with longer books and like my books short so I can say I’ve read more of them. For those of you who want to revel in one world for as long as possible, it’s surely a positive.

All given, well worth a read – and I might add the audio, as with the cover, has been excellently produced. The narrator does a great job with the different voices and presenting the action, a definite talent there, too.

Check out Symphony of the Wind here.