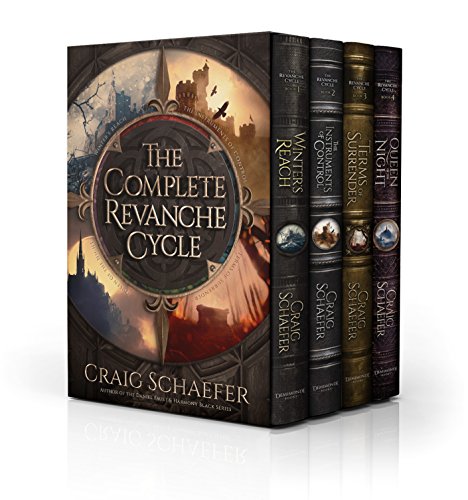 The Complete Revanche Cycle by Craig Schaefer is available here.

So, I’ve been trying to read and review self-published books all month as part of Self-Published Fantasy Book Month, and herein lies the final of said reviews. Considering this one included four books, I might’ve done a bunch more reviews if I hadn’t read a boxset. So why did that happen? Well, one reason is that I intended to read this on a long holiday to Japan, which COVID scuppered, so part of me wanted to feel I at least achieved part of that holiday. And the other reason is that Craig Schaefer writes really addictive books.

I happened upon this collection after reading Sworn to the Night, which I really enjoyed but realised I’d get more out of by backtracking a bit. Then I bought 4 books at once and of course didn’t read them because that suddenly seemed like a lot.

However, I’ve now gone through all four in under a month, and for me that’s unprecedented. I usually leave big swathes of time between books by the same author (unless your name is Shirley Jackson). But I breezed through Winter’s Reach, the first book, so merrily that I wanted to just get on and see where what’d happen next. And so on, until suddenly I’d read the lot.

So what’s the deal with Revanche? In short, you’ve got some wandering mercenaries, renegade religious folk and a bunch of politicos all wrapped up in various conspiracies surrounding the papacy and rulership of an empire of renaissance-type city states. Add to that some sea-faring, a city of criminals in the harsh north, a couple of monsters and a creepy coven of vengeful witches, and you have a dark, fast-moving adventure.

Now, I say I merrily breezed through it, but though the Revanche cycle is addictive, fun reading, it’s also very bleak. Bleak settings, characters, and things to be endured (and hey, satisfies today’s SPFM’s Daily Challenge: That’s Grim!). It is entertainingly gritty, and I’m a big fan of Schaefer’s sinister side with the witches and weird noose women, but there isn’t much respite from it, especially when you dive in for four books in a row.

While the series overall was very enjoyable, I found it didn’t vary much over its span (and a lot of the fantasy-adventure promise in Winter’s Reach gives way to people’s city-based scheming in the other three books). Again, that’s possibly pronounced through reading it all at once: spread out, one tends to return to an author to enjoy more of the same, after all. But one thing that really niggled at me was that damn, one character professing to be an amazing assassin didn’t half come across as a complete amateur in all he did…

Ahem. Anyway, I liked it more than that paragraph suggests – it’s very readable, a page-turner and plain enjoyable, for the most part, and knowing something of how this story fits into Schaefer’s wider series I really admire the scope of his fantasy scheming.

Check it out the full boxset here, but don’t feel like you have to read them all at once (if you can resist!).