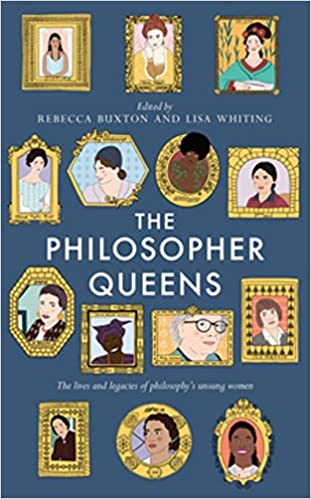 The Philosopher Queens, edited by Rebecca Buxton and Lisa Whiting, is out on September 17th, 2019.

I came across this book because I’m friends with the father of one of the editors, but I’m pleased to see it’s been doing tremendously well quite outside that base nepotism. It’s easy to see why – the concept is simple, topical and excellently realised: women philosophers are not generally well known, and this book seeks to change that through essays on twenty women philosophers who have helped shape the world.

Each chapter covers a different philosopher, and each is written by a different philosopher, spearheaded by editors Buxton and Whiting (who have a couple of chapters themselves; actually amongst the most interesting ones). For a relatively short book, the range of characters and topics presented is very broad, from thinkers of antiquity through to modern civil rights activists. It’s also very engaging; I studied a few modules of philosophy at university myself and found it a relentless chore, listening to the thoughts of stuffy disengaged old men, but this book is very much the domain of everyday, accessible ideas.

At the same time that it informs about the influence these mostly unsung philosophers have had, it also educates on the challenges they have faced, with very telling parallels between the societal problems of history and today. A case in point is the chapter on Hypatia, in which we learn not just of the impact she had on thought at the time, but how she, being an easy target as a woman, was ostracised and ultimately punished as a scape-goat in a feud between power-hungry men. Something both tragic and sadly familiar if you look at the way just about any high-profile woman is treated by the media now.

There’s a lot of inspirational material in here too – many of these philosophers’ ideas have outlived them, even if they didn’t reach the sort of fame their male counterparts did, and they present really strong examples to follow, from Elizabeth Ansombe’s defiance of male-dominated Oxbridge to Sophie Bosede Oluwole’s ability to reconcile the philosophy of her people with Western thinkers (who would not extend the same courtesy).

The book is published through Unbound after a crowdfunding campaign which got an excellent response, surely reflecting the demand for such a work. It is a timely, relevant and brilliantly conceived book that I hope will reach a big audience, these are lives and learnings that deserve to be taught and celebrated.

It’s available for pre-order now here (not sure if there are still hardbacks out there to buy now though, there might be!).