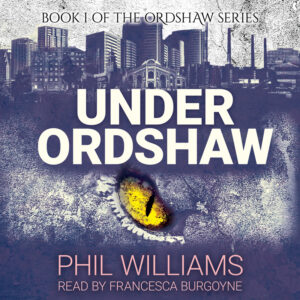 It’s been a while coming. Ordshawdio. Audshaw. However you like to pun it – the world of Ordshaw while soon be ready to invade your ears with the pervasiveness of a burrowing grub. But one that brings pleasure.

If you’ve been following me on Twitter or pretty much anywhere, including the streets, you might’ve heard me mention that I’m excited about this – we started work on it around October and I’ve been enjoying the process ever since. After originally thinking of recording it myself (terrible idea), I eventually teamed up with veteran actress Fran Burgoyne and am massively glad I did.

Having performed on the stage, screen and for voice-overs, Fran’s brought a professionalism to the production that I never could have, and the characters burst with life. I don’t know how everyone else imagines them, but to my tastes she’s really nailed the voices of this eclectic UK city – and there’s something really special about actually hearing the characters interact.

Fran’s won awards for her work in short films and has a whole heap of stage roles under her belt, but this is first foray into audiobook production, so I’m thrilled to have her make the debut with Under Ordshaw. And fully intend to corral her into producing the rest of the series as soon as humanly possible. Though that might take a minute, as she’ll be diving into another theatre production soon with the Baba Yaga at The Hullaballoo (and who wouldn’t want a Baba Yaga play – check it out if you can!).

Finally, apologies to anyone who’s been waiting on this; we had hoped for a release sooner but as we’re both new to this it’s taken a little longer than expected. But I think it’ll be well worth the wait. Without committing too hard (I’m not even sure on committing to that cover image, yet!), fingers crossed for a March release. The book should be in the regions of 10 hours long, and if you enjoy it half as much as me you’ll be very chuffed indeed.