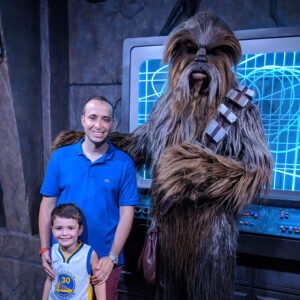 Today I’m happy to present an interview with Jon Auerbach, author of Guild of Tokens and all-round lovely chap. Jon’s a fellow author I met (virtually) through the SPFBO contest a few years ago, and as well as writing delightful urban fantasy novels he’s very active in the SFF self-publishing community, running interviews, promos and more – definitely a good chap to know!

He’s joined me in helping set up the current Fall into Fantasy promo, and is here today to share a bit about his writing experiences and what he’s got up for offer himself. 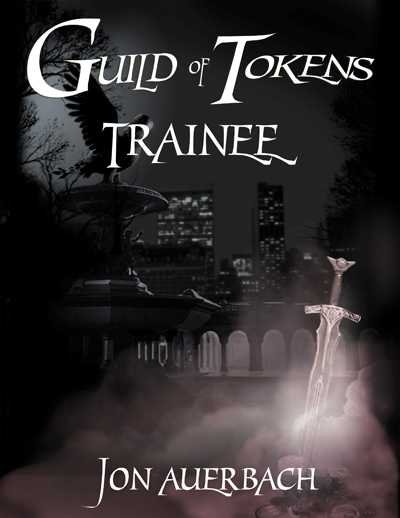 Guild of Tokens Trainee is available free as part of the Fall into Fantasy, until Nov 30th –get it here.

Welcome Jon. Please tell us, what do you write and what have you written?

I write urban fantasy with an epic twist. My series, Guild of Tokens, currently has one book and a collection of short stories, and I’m currently working on the second book, Guild of Magic. The series is set in New York City and imagines a modern world where the quests of video games and fantasy novels are actually real. They’re dispersed through something called the Quest Board (a backwater section of Craigslist or a long-forgotten BBS, and completing a Quest earns you tokens of various denominations, ranging from wood to bronze to silver. At first our main character Jen Jacobs thinks the whole thing is some viral stunt for a rival video game company, but she soon realizes there’s a deadlier side to the Quest Board and the Quests.

What makes something a uniquely Jon Auerbach book?

Chapter epigraphs and interwoven stories that the characters in the main storyline come across during the plot. So basically Mistborn meets Cloud Atlas. I’m only half kidding. I also like mixing in obtuse references to my favorite video games and anime as easter eggs.

And tell us a bit about your Fall into Fantasy offer…

My short story in Fall into Fantasy is called Trainee. It’s a fun prequel starring Jen’s morally grey mentor Beatrice as she trains a new assistant quester. I wrote it midway through writing Guild of Tokens to get a feel for Beatrice as a character and then went on to write two more prequel short stories starring her. They’re available too if you know where to look…

When you’re writing, who do you like to read?

Any fantasy really. I found over the past few months when I stopped reading fantasy that my motivation to write went way down. It was worth the lost months of productivity to figure that out, though, so now I’m back reading fantasy again. My last read was Fortune’s Fool, by Angela Boord, and now I’m reading The First of Shadows, by Deck Matthews.

Where else can we find you?

Jon Auerbach’s love of fantasy began at the tender age of six, when his parents bought him the classic 1977 animated version of The Hobbit.

Jon hopes to pass on his stories to the next generation, including his kids, who have their own copy of The Hobbit that they lovingly call “the Bilbo book.”