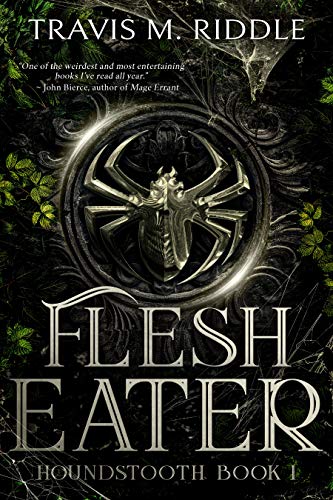 Flesh Eater by Travis Riddle is out Oct 27th, order it here.

Here’s what you need to know about Flesh Eater by Travis Riddle: it involves people racing giant spiders and a lot of peril involving weird monsters. And they’re not actually people, they’re more like animals but they’ve got more human depth and emotion than you get in a lot of books. If that’s not enough for you then I don’t know what.

Okay, I’ll go into a little more detail. Flesh Eater is the first in a trilogy of books set in a new world for Riddle, which has immediate overtones of Redwall (books I’d forgotten I’d read until I started this and got strange childhood flashbacks, like, did I really once read about sword-fighting badgers?). But besides the animal characters, this diverges a lot from the Redwall series in time and tone: here, we’ve got gun-toting foxes and heavy-drinking beavers, bunnies who cuss and salacious raccoons. Also don’t forget the monsters.

Riddle has a knack for raising the weirdness scale, and alongside a very original fantasy world, he’s created flashes of monsterific (coining that) action that border on horror. This takes a talent to pull off – because between the heady action sequences and sudden shocks of nastiness, there’s a wealth of wholesome, natural-feeling interaction between charming characters (which is plain lovely to watch develop). This exact juxtaposition of pleasant and nasty is something you’re unlikely to find elsewhere, and it might be combo of styles that won’t work for everyone but it hit all the right notes for me.

But wait there’s more. The food. There’s a lot of strange food, excellently described. I’m pretty well convinced Riddle could write a whole book about random invented foodstuffs and it would be captivating.

So what’s the tl;dr? Exciting, animal-based fantasy capers with wildly original creatures and settings, underpinned by a character-driven story that’ll draw you in then RAH! throw a monster in your face. If that sounds good, you should order it here now. If it doesn’t, I’m not sure why you wouldn’t have stopped reading after the racing spiders…