You might have already seen the cover for my current project. I haven’t done a great job of building up to a big reveal – it slipped out about a month ago when I accidentally published my schemes to create some Ordshaw merchandise (there’s now a mug available to purchase). But I haven’t got round to officially revealing it yet, and this is a good time: at the end of last week, I finished the first draft at a sprint finish.

The Violent Fae has been a tough book to write in many respects. Those who’ve already reached the end of Blue Angel will know that the Ordshaw saga only gets more complex the further you delve. The city’s teeming with secrets, and characters, and by this third instalment there’s a lot to answer for. It doesn’t help that this book reveals something of the Fae Transitional City with all its extra complications…

I’ve been slogging away drawing the threads of this opening trilogy to a satisfying conclusion (or rather, many conclusions), and at times it felt like it’d never end. But with my wife away for a few days, I sat down and ploughed through the final 14,000 words in a single day, and lo. The first draft is ready.

For this book’s design, I wanted an emphasis on the troublesome people that have made life so difficult for those of us who just wanted to figure out what’s going on with all these monsters. But the imagery left me scratching my chin. As I wrote in this article hosted over on Bibliosanctum, it’s always been my intention to produce something a little different with this series’ style, but how to depict the Fae with the same simple imagery I’d established in books 1 and 2?

Truth be told, I couldn’t. After some time trying, I gave up on simple.

Fortunately, after I’d established the style for the Ordshaw series, I figured a way of bringing people into it for The City Screams. That design gave me an idea for this latest novel. Could I embrace the Fae in all their gritty glory?

The result is something (I think fittingly!) almost reminiscent of old warplane nose art. It might not be your usual idea of a fairy, but then Ordshaw’s not your usual story.

Without further ado, here it is, the cover for upcoming Sunken City finale, The Violent Fae: 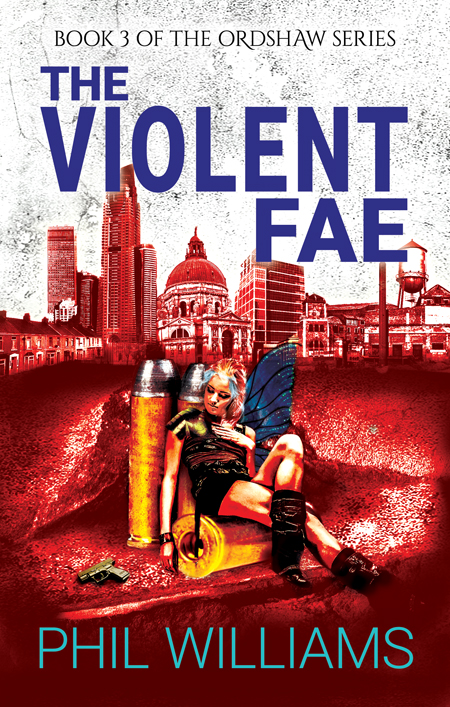 I’m pleased how it’s come out, myself; even if it’s just from my perspective, it captures the feel of the book for me. Let me know what you think!