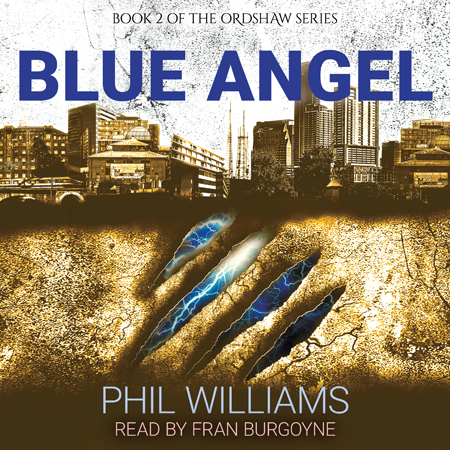 This has come sooner than I expected – or time is moving faster, I’m not sure – but we have now wrapped on recording for the Blue Angel audiobook, and final quality checks aside it is all but complete. Tentatively, given the palaver we went through with Under Ordshaw‘s release, the book should be available on Audible in August.

What to Expect from the Blue Angel Audiobook

Fran Burgoyne has returned to Ordshaw after her fantastic performance with Book 1, and if I say so myself she’s done an even better job this time round. Expect more colourful characters, more drama, more laughs, and a rollicking, pulse-pumping time. The acting again adds a whole extra dimension to the story that really brings it to life.

If you’re yet to delve into the second chapter of the Ordshaw series, this is where the stakes really start to mount and the city’s darkest secrets come to light. There’s a lot of manipulation and infighting going on, and it seems Pax is caught right in the middle of everyone’s wildest schemes. A frightened family and some renegade Fae might be her only allies – or then again they might makes things worse. Ordshaw’s crumbling, the beasts are getting angry, and it’s all on her to solve.

Blue Angel clocks in at slightly longer than Under Ordshaw, and frankly I’d be happy if it was twice as long, it’s just so much fun. The process has been great to go through, not only in experiencing the story in a new medium, but for being able to better picture the characters in action. On repeat listens, I keep finding new things to like – Letty fans will love her characterisation, and divisive as Casaria is, his sections are especially compelling. That boy is messed up.

Watch this space for more news on the release – and if you haven’t already given Under Ordshaw a listen check it out here. I’m feeling increasingly pumped towards promoting these books much more in future – I want everyone to hear them!