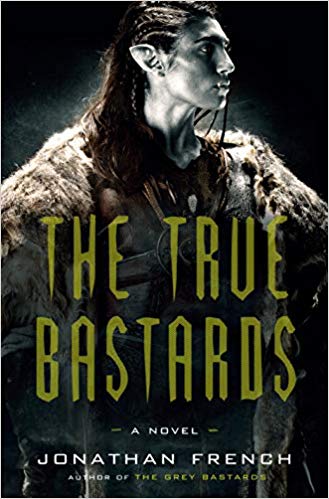 True Bastards by Jonathan French (Lot Lands Book 2) is out on October 8th, 2019.

I was very lucky to receive an advance copy of True Bastards recently, so I felt it my duty to post a longer review than usual. Well, because of that and because I really like these books. In short: True Bastards is a tremendous sequel to a great book. It brings back all the goodness, with more to boot. If you’ve read Grey Bastards then you should already know what to expect. If you haven’t, then stop wasting your seconds here and do that.

Still, a little backstory: Grey Bastards was, in simple terms, Sons of Anarchy in a fantasy land. But that doesn’t do justice to orcs riding hogs, vile sludge sorcery and a unique no-man’s-land setting, somewhere between civilisation and savagery patrolled by said outlaw orcs on swineback.

It was, if anything, more fun than it sounds.

While delivering a similar romping good ride, True Bastards builds on the complexity of the first book with more twists and turns and a protagonist all her own, with no Sons antecedent. We’re now following Fetch, the Bastards’ one female rider who had a lot of presence in Book 1 and delivers again here. The action opens with Fetch trying to rebuild her community and carve out more respect, whilst tackling new and creepier powers threatening oh, everyone.

One of the things that made Grey Bastards stand out for me (other than the unapologetic joy of realising its concept), was how intricate the plot felt for such an action-packed page-turner. French gave what could’ve been a simple tale of romping outlaws a lot of clever twists and a memorable cast of complex characters. It should be no real surprise that True Bastards does the same – from the ebb and flow you might predict when action’s coming, but not so much where it’s going. And the twists and turns don’t just make for a clever tale in itself, they build on the foundations of Grey Bastards to make that book more complex.

I’m really impressed how these books have outgrown their inspirations. When books hit on a catchy starting concept such as paying homage to a TV show, all too often they don’t do much for themselves. But the Lot Lands books give us something that truly stands on its own. I was a Sons fan (though I felt it had its flaws), but right now I’m starting to feel like Sons’ greatest achievement might have been inspiring these books.

For a bit of balance, any negatives? I’m pressed to find flaws. There were one or two times I might’ve liked to remember all the details of Grey Bastards better, but even here I think French did a great job of subtly introducing backstory only when necessary. Otherwise, True Bastards might not be everyone’s cup of tea due to its violence, bad language and extreme irreverence, but you would’ve learnt that from Book 1 (and to be honest they were all positives for me – though worth noting I think French handles all three very well).

True Bastards is more than a worthy sequel, it’s the proof that this series has a lot more to give, and I am already excited for Book 3. Big kudos to the author. You can get it here, out Oct 8th.