The Stars My Destination by Alfred Bester

A story that does an awful lot in a short space – The Stars My Destination is strikingly efficient with its seemingly simple tale of revenge, yet spans a richly imagined intergalactic future and shines a light on some very well-realised emotions. Gulliver Foyle is a fascinatingly horrible protagonist – and, like him, the cast of side-characters and big set-pieces create immediate, memorable impressions as he goes on his vengeful journey. It doesn’t need much more introduction – that’s time that could be better spent reading the book – so, if you haven’t, go right ahead. 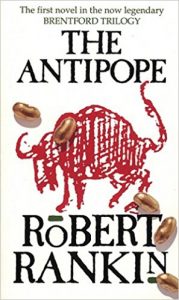 The Anti-Pope by Robert Rankin

Robert Rankin is something of a cult legend in the UK, but this was my first foray into his work. He has a splendid array of absurd titles, and, if The Anti-Pope is anything to go by, even more absurd stories. It’s urban fantasy, but not as you know it – a touch of the irreverent humour of Douglas Adams, a splash of magic and horror and, crucially important, a good old-fashioned cast of London drunks. In this story of a world-threatening demonic cult, Rankin perfectly captures the nature and nuances of the deplorable regulars you’re likely to find in any local UK boozer. It meanders a bit, focused more on the boozing than the coming threat, and has some fairly dated representations of women, but you’ll certainly be immersed in the world. For better or worse! 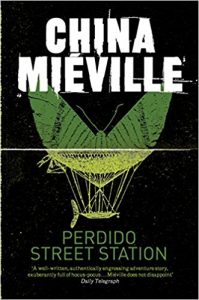 Meiville builds an incredibly creative and well-realised world with far too much detail to support an otherwise fairly thin story.  This gritty urban (steampunkish) fantasy puts the city at forefront, which lends itself to some superb ideas, but to my tastes precious little of its world-building adds anything to the plot – padding the action out too much. It’s difficult to care about what happens, though it occasionally hits some thrilling beats – and I couldn’t help but feel there were the makings of a superb book here, if it’d only been about 300 pages shorter. If you want to be transported to another, rather depressing, world, for a long time, then it’s well worth a go – otherwise it’s a bit of a chore.