The Courier – An Ordshaw Vignette 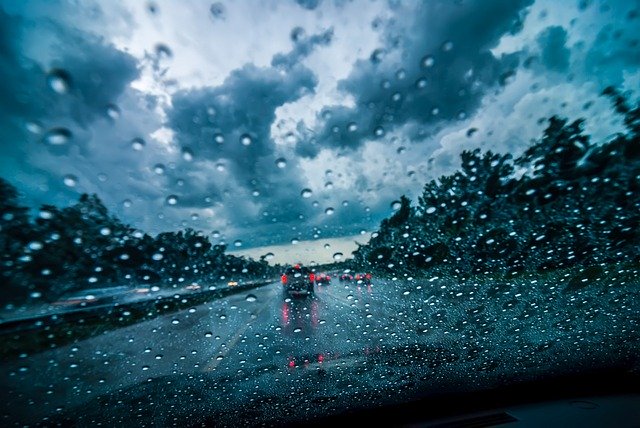 The latest Ordshaw Vignettes is one I’m sure we can all relate to. Our late driving, all alone, something starts making a noise in the back of your van. What are you gonna do? The usual.

You can now read The Courier absolutely free below! And be sure to check out the other vignettes in the series – dotted around this site and the internet at large.

It made a noise like a gate screeching slowly open. Except alive and massive.

Tyrone clutched the steering wheel and twisted around, though the rear of the van was sealed off. The noise came again, loud even over the rumbling engine and the drumming rain. Tyrone swore and looked for somewhere to pull over. Damn country B-road, wide and fast but penned in by trees and a verge. Unlit.

It banged against the wall.

Hell – definitely something alive back there. Another screech almost sent him swerving into the verge in panic. Hell and damn – knew this job was wrong from the start. Shouldn’t ever trust rich old white fools paying that much to haul a crate two hundred miles up country in the dead of night. Especially not with a pick-up under a bridge and instructions to avoid certain roads.

Tyrone gritted his teeth against another screech. The vehicle shook on its axes with the next thump. No way. Not coming out of my insurance. There was a lay-by. He swung in and slammed the brakes, knocking down whatever was in back. He killed the engine. Quiet now.

That crate had been nailed shut. Held in place with the chains. Figured it was contraband wine or something, took care to make sure it wouldn’t move. How’d this thing get out?

The screech redoubled, just beyond mere inches of metal, and Tyrone jumped – hitting his head. He tore himself out of the seatbelt and threw open the door – collapsed on the rain-slick tarmac and hit his head on the road. He was up in a flash, ten metres away and staring.

The thing beat against one side of the van then another, its climbing cry painful to hear. An enormous bird mated with a cat. Stolen from a zoo? Or a lab? The vehicle shook violently; whatever it was had more power than the weight of the crate suggested. A van wall bent outward. Son of a.

Tyrone ran to the cab and grabbed his phone, brought up the old man’s number. Dialled and scrambled into the petty cover of trees. Already soaked anyway, through to the socks. The phone rang with no answer, while the creature finally settled. Tyrone gave up on the call. No help there. Another hundred miles to go, the van wouldn’t make it. Hell no. Not raising his premium on account of some dodgy bastard shipping animals on the sly.

Tyrone crept around the back of the van. It was calm now, but next time he might be doing 80 on the motorway when it kicked off. Make him slam into someone. Roll the vehicle. Hell no. He reached towards the handle and bright light shone over him, a passing car making him leap half out his skin. He growled at the red lights quickly lost in the rain. Put his hand to the handle again – it slammed into the door, so loud he fell flat on his arse.

“Hell hell hell!” Tyrone shouted, as the thing screeched more furious than ever. It bounced off the walls, even the ceiling. Dammit and hell, Tyrone charged at the van, screaming in fear and fury, and thrust the door open and used it as a shield, the same time. The thing pounded a circle round the van before launching out the opening, bouncing the suspension. Tyrone slammed the door and ran back inside. He started the engine and stomped the accelerator at almost the same time. Swinging back into the road, he almost clipped the verge. Kept going, accelerating into the rain, and hit 70 in seconds.

Tyrone stared unblinking from one mirror to another.

Wasn’t chasing him, was it? Couldn’t keep up if it was. No way. What was it? He had felt it pass, heard its screaming peel off into the trees.

His phone buzzed and Tyrone took a deep breath. The client’s number on the bluetooth display. He hit answer, and the old man asked, “Is there are problem?”

“Woke up, didn’t it!” Tyrone shouted. “Live bloody creature, woke up and got out!”

Ah? That was bloody it, was it? Ah? Tyrone swallowed a thousand insults, too angry and scared and confused to speak.

“Got out. I bloody let it out.” Tyrone didn’t sugarcoat it. “And you’d better believe you’re still paying. Oughta be double, hazard pay and all.”

The old man was quiet.

“You hear me? I coulda been killed. What the hell was that thing?”

“Think I was hanging about for photos or what have you? Hell no, I didn’t see it and –”

The phone clicked off – the old man hung up? Tyrone stared incredulously at the dash. That no good pig. He put his foot down again. Get away fast as possible; he’d do something about it if the bastard was gonna ghost him like that. Police might be interested in some rich fool moving unholy beasts. He had –

But Tyrone saw the bend too late.

Never accept crates from strangers. Stay with us next month for another vignette – and if you haven’t already got Volume 1 of the Vignettes, join the mailing list here.